Addiction and Other Love Stories 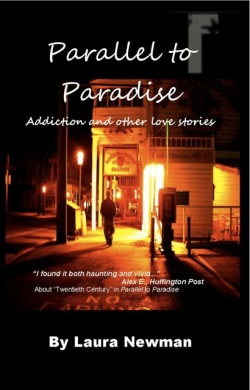 Georgia eats her blanket….Aiden gets drunk on Red Eye and falls in a bathtub full of wallpaper paste….Alice falls for a one-legged Mexican cowboy. Included in this controversial collection of shorts is a story about a Catholic girl contemplating an abortion. A gay boy growing up in the wild, wild West. A mother of a heroin addict. Butter sculpture. Parallel to Paradise makes the ordinary, askew.

Below is a synopsis from each story:

I like the taste of Communion. It does not taste like the body of Christ, which I imagine to be salted by His sweat and the spray of Galilee. It tastes like His clothes, a fine circle of linen. I don’t think it’s baked. I think nuns in big, white, French wimples weave it on a loom while singing, “Dominique, nique, nique.” I like to hold it in the top of my mouth for as long as possible and feel it melt like the rice paper around Chinese candy. One Sunday I touched it with my finger and my older sister made me walk home with my hand in front of me, touching nothing, until I washed my hands. Why can’t I touch the body of Christ?

A visit to the ultimate anti-establishment festival.

We load up the Jeep and head for the Black Rock Desert because the Man is going to burn at midnight and we want to watch him go. We stop in Wadsworth at the Indian mini-mart that sells handmade doe-soft moccasins with little colored beads that tell a story on your feet. I can’t read the stories. They might say White Man Go Home.

A mother deals with the fact that her son is a heroin addict.

When Georgia was a child she ate her blanket. Thread by pink, blue, yellow thread until there was just a thread left, which her mother saved as you would a lock of hair for remembrance.

The Quality of Light

A small story about a mother’s love for her children and nature.

The road out to the cape is traveled most often by deer, elk, rabbit and hippies. The hippies don’t care about the lighthouse. They are in search of the cow pastures that dot the cape because it is known that psilocybin mushrooms grow in the silty, poopie meadows. It’s like an Easter egg hunt. “I found one! I found one!” Jump up and down. A tisket a tasket, psilocybin in my basket.

An Irish gay boy grows up in the Wild Wild West.

I don’t know that Virginia City was the best place for a drunk. For the love of God, we owned our own bar, and if Mum kicked him out, Da had only to walk two doors down either direction and another stool trilled round, all shiny red vinyl, like it was calling his name. “Auld Aiden, come sit on my face!”

An exploration of the fear of water.

Jason and I are out on a winter-spring walk down by Sawmill Pond. There is an island in the middle of the pond with a willow tree that Rapunzels in the summer. Jason’s dogs, big border collies, run across the ice; they have no problem making the island. The little island starts singing that siren song that all islands know. The song that wrecks ships, beaches whales, calls teenagers out on thin ice.

A cautionary tale about the pitfalls of moving too fast into a relationship.

When I was a young girl I fashioned my future upon my Malibu Barbie and her aqua marine Karmann Ghia with personalized license plates. So when my dad gave me the keys to a seventeen-year-old 1963 Ford Valiant station wagon painted the odd shade of lox, I hyperventilated.

A chronicle of a best friend’s descent into alcoholism.

But now, these later years, John preferred the drink in his hand, the reassuring sweat of the glass, to the less assuring glisten of human skin. Ruby didn’t know when it was that John lost his confidence. She didn’t know if the sweet, bitter vodka, tequila, gin, rum, absinthe, beer, wine, somebody give me a drink, gave him all the confidence he ever had, or took it all away.

A tough story about what it takes to leave an abusive marriage.

In the first summer after the divorce, Shawn and Lara don’t know how to end the marriage. They talk on the phone in the dark hours. They go for a walk in the birch trees by White’s Creek. Lovers carved their declarations into various trunks so many years ago the carvings look like old tattoos, impossible to read. A bleeding heart, a date, maybe 1917, maybe not. The little round birch leaves make that quiet leafy sound when the wind moves through. They have walked this path many times.

“Shawn,” Lara says, “If neither of us remarry, let’s be buried side by side.” Shawn knows she serious; she likes graveyards. “That seems a long time to wait to lie down next to you,” Shawn softly replies in the birdsong grove.

The confusion of leaving childhood.

How could Molly defend herself? How could she explain that she was 14 years old and didn’t know what to do with her breasts, with her bloody underpants, that she still wanted to be a little girl on a rusty bike, that she did not want to choose the morality of Iowa or the jangle of California, or the hippie invasion of Lake Tahoe. How could she explain that sitting in the graveyard by the warm stones, with the tiger lilies, felt closer to God than the teak pews at Good Saint Wenceslaus. That the holy water was smudgy from all the fingers dipped into it while the creek behind the graveyard was cold and clear.

A young white woman from 1910’s Wisconsin falls in love with a one-legged Mexican cowboy.

The oldest was a boy called One, which I was told to call John. The next was a girl named One-Nita, which I took to mean “first girl” and she I called Nita. The third child was Hey-Zeus, which sounded Greek, and I was told to call him Jesus, which I would not. George suggested Joe, but it came out Ho and it’s hard enough being Mexican without a Chinese name, so we settled on Sam. The baby girl had the name Nina, which means Baby Girl and we called her Nina.

A Small, Too Familiar Gesture

We follow a high school love triangle into adulthood.

How to explain what American Flats looks like? Imagine a young woman in about 1995. She’s got tats, full on, both sleeves done in Vargas girls and vortex color swirls. A Chinese cherry blossom twining her spine, twisting round her exposed belly, jeans down low. Beautiful in structure, but she’s at that point in her addictions where you can tell that it’s too late for her; she’s not going to make it back. She makes you feel so poignant that you want a piece of her, you want to tattoo the inside of her wrist, do a fashion shoot, buy her a drink, hasten the destruction. That’s the feeling of American Flats.

Finding a path to God through a circuitous route with the help of a monkey, a gorilla and a dog.

Pac’s a crack dog, always got to move move move. He’s a Beagle with the seedy underbelly of a self-centered Terrier. I found him hitchhiking on the side of the I-10 in Louisiana, so he’s got a Southern drawl, which is bad enough on a human. Imagine his howl!