And other short stories 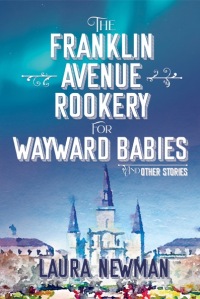 Livinia is in a three-way with Christ….  Vittoria is becoming Joan of Arc….  Dorji is riding her bicycle 400 miles to Katmandu with a side of ham….  Gomez has a date with destiny in the syrup aisle….  Silvia’s symmetry is askew….  Chewy is carrying Jesus on his back through the traffic lanes at the San Ysidro boarder crossing…. Eloise is destroying the exquisite…. Maggie is taking her dead brother on vacation…. Roxayn is turning Japanese…. And, are those pink flamingos out on the iceberg?

The Franklin Avenue Rookery for Wayward Babies travels from Varanasi to Tijuana, Rome, Kanazawa, New Orleans, the Klondike, Isle of Skye. The settings breathe through the lyrical stories. But it is the humor and humanity of the characters that renders Tourette’s of the heart in each quirky, underdog journey.

Below is a synopsis and excerpt from each story.

Tourette’s of the Heart

Dorje abandons her family to the Bitter Years in famine-struck Lhasa and attempts to ride her bicycle 400 miles to Kathmandu, fortified with a stolen wheel of yak cheese and a side of ham. Maggie devastates her family in a single act and finally leaves Sedona, taking her dead brother with her. These two women cross the world in search of deliverance and self-forgiveness.

Dorje believed the only thing she could do to redeem herself was to become a nun. But once a person has been weak in this world, has abandoned what is known to be right, it’s not so hard to do it again, now is it?  Pradeep sought out Dorje in the quiet places she liked to go, inside the hay barn where the cats sleep, in the copse of aspens, to the donkey meadow.  They never touched again. He was, after all, a monk. But a year later when Pradeep proposed they leave the monastery and marry, Dorje said yes, yes, yes.  Because she did not want to be a hungry ghost, because she wanted to forget.  Because he had Dalai Lama eyes.

A mother believes that her only concern is for her children when her ex-husband suddenly dies five days before their daughter’s wedding. As she navigates her children’s grief, she is surprised to find her own is decades deep.

The tattoos are hula girls.  Pinks and greens.  A Tiki torch.  I think Ben used Tommy Bahama shirts for his patterns. On our first date I reached across the table and ran a finger up a florid hibiscus.  “What’s the story?”

“I was born without it.” My fingers dropped back to the cold hook, pressed my fingerprint onto the metal. “You’ve never made love until you make love to a man with a hook for a hand,” Ben said in a serious voice, sealing the deal.

Gomez has a date with destiny in the syrup aisle. Queenie is mistaken for an alien. Chewy is carrying Jesus on his back through the traffic lanes at the San Ysidro boarder crossing between Tijuana and San Diego. The gun is in the lake.

In the mornings Gomez liked to pour himself a good strong cup of coffee flavored tequila and a small bowl of Grape Nuts.  No milk. Just a bit of crunchy fiber to aid his digestive system.  He would finish it off with a fig. And then a nap.  At 94 he was hoping that he would make 110 and that some American news crew like 20/20 would do a story on him asking to what he attributed his long life, and he could say, “Figs.  Figs are the thing.”

The House of Naan and Saffron

Livinia is in a three-way with Christ. Nils is following Rudyard Kipling to India. Kris is playing I Spy on the sari-soaked women rising out of the Ganges in their second skin of silk and color. Marigolds and smoke, hopscotching monkeys. It is impossible to see clearly in Varanasi.

Sanjita sits on her thin mat receiving rice, looking out to the Ganges, singing to herself, “Jesus Christ. Superstar.  Do you think you’re what they say you are?”  Livinia and Nils sometimes play the Broadway score at Sunday dinner, and Sanjita likes the tunes. She had joined the Church of Loaves and Fishes to get extra food for herself and Neera, but now she brings as much food as she takes.  She’s not completely sold on Jesus, but she is on Nils, the sincerity of Nils.  Some mornings, when Sanjita arrives early at her begging station and the sun is red, she sees Livinia get into Hari’s boat.  She sees Livinia does not pay.  She knows Livinia is a fool and will someday pay a full fare.

Katrina has a regard for nuns, and it isn’t high.  But is that a Vargas girl tattoo on Sister Hope’s arm?

I know I was born in the Superdome.  My name’s Katrina Theresa.  Named after the storm and Mother Theresa.  Not the good one.  Just our mother, Theresa Chalfant.  Sometimes I imagine what it must have been like in the Superdome.  Mama won’t tell me about it.  So I make the story up in my head:  I picture the Superdome coming off its foundations, pulled out to sea. A slave ship.  The weather is like looking into the round porthole of the washing machines at the launderette.

Vittoria, in male disguise, becomes an altar boy so she can steal lira from the collection basket, but ends up smoldering for young Father Nicola.  Emboldened with silk lingerie and a pomegranate, Vittoria is on her way to becoming Joan of Arc.

Father Nicola looked like the cover of a romance novel.  All the sexy saints are men.  Think Saint Sabastian with the arrows.  Sabastian’s the patron saint of athletes, but I think he might also be the patron saint of masochists, tied to the tree, look of transcendental ecstasy on his face.

A young WWII soldier from Iowa can only save his mind through singing.

German soldiers jumped from the spiraling plane. Their parachutes clouded. I am the waist gunner so I shot one dead. You can’t say I shot him out of the sky because his parachute still held him up. But he was dead. Blood coursed from his chest. I wondered if his blood would reach the ground first. I wondered if his soul would slide out with the blood or if it would be stuck there for awhile .

The Klondike. Small animal taxidermy. A girl with a plaid accent from 100 years ago has great impact on a color-blind violinist who is placing his faith in the northern lights. And are those pink flamingos out on the iceberg?

At last the northern lights. For Evan it was only grays and ghosts. He took up his violin and played a melancholy piece that made Uki feel falling stars and whale songs. Eagles with their terrible talons. Things that rushed, water and the artic hare. Things that waited for spring. The booming of blue-bottomed icebergs. It was a song of Alaska. Evan played with eyes closed, colors wavering through the notes of his internal aurora borealis.

The Color of Fisticuffs and Bloodlines

Never ask a mother if she would exchange her life for her child’s. The answer may not always be yes. A mother and daughter find themselves somewhere between black and white, purple and blue. Life and death.

Once Roxayn got over the awful shock of dying and body disposal, she settled into her new freedoms and restrictions.  She tried to show George and Fiona she loved them. Remove obstacles for them, like survivor’s guilt – that hard-to-remove heart stain.  She was sometimes, somewhat successful.  She traveled.  Saw all the major sites. 1,000 Places to See After You Die.  She learned that Mount Everest is not the tallest mountain at all times.  That water talks but is inane like a drunk aunt, that bricks have a fascination with the rearrangement possibilities of earthquakes.  Humans don’t need to believe it for it to be so.

A reimagined fairytale based on The Little Match Girl by Hans Christian Andersen.

On the morning of the summer equinox the sun rose over San Diego as if drawn with a child’s crayon, flat and waxy.  A low and roaming fog caught on harbor masts and drew ghost sails across the sky. The city was cool and preparing to sparkle. But just south, at the San Ysidro border crossing, the sun was in a different mood, the sky already blanched by rising heat. As the people of Tijuana came out of their homes few bothered to look up, for the poor come to believe that they deserve less, even when it comes to weather.